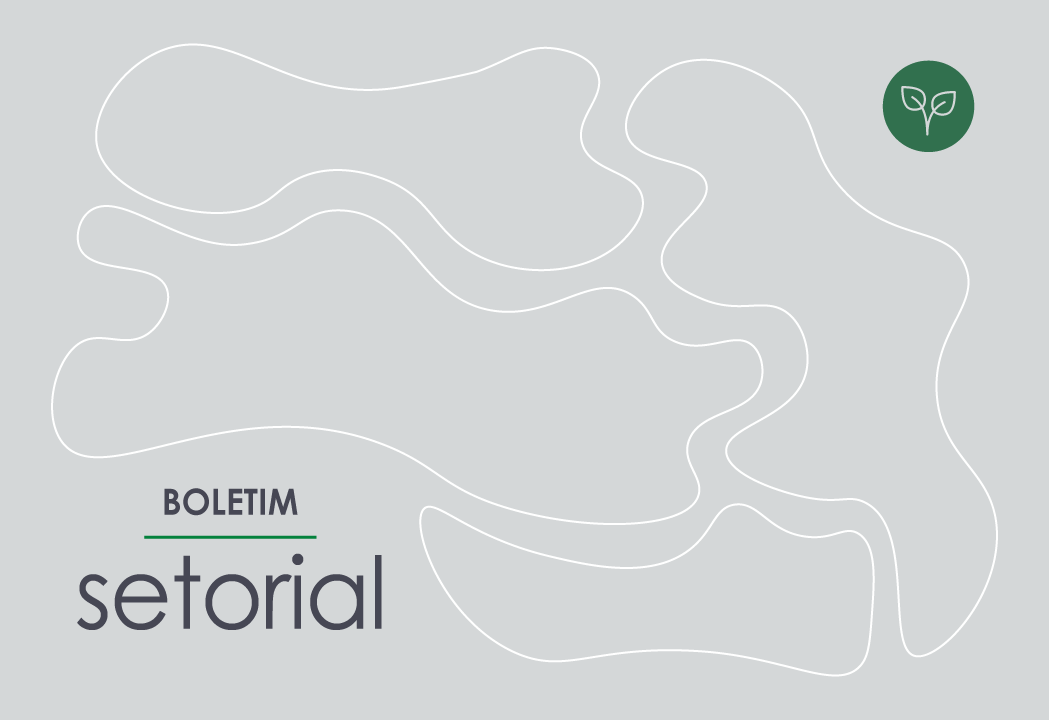 The sustainability agenda has been the target of harsh international criticism in the Bolsonaro government due to record deforestation in the Amazon and fires. Still under the crisis of the Covid-19 pandemic, the world economy was severely affected in the economic sphere, needing to formulate robust investment strategies in the coming years. This scenario contributed to discussions on how to resume the economy on a more sustainable basis and the “Green Resumption” movement brought together countries in the search for actions against climate change, seeking to reinforce the relevance of global sustainability.

With this mindset about the importance of good environmental practices, in 2021, the increase in tensions in the Environment Ministry led to the exoneration of the former Minister of the Environment, Ricardo Salles. Salles' management became unsustainable after controversy due to the publication of a ministerial meeting, which took place in 2020, at Palácio do Planalto, suggesting to President Jair Bolsonaro that the government take advantage of the media's focus on the Covid-19 pandemic to "pass the cattle". in the environmental area. Another aspect for the exoneration was the inquiry into Salles, authorized by the Federal Supreme Court (STF), on charges of crimes and creating difficulties for environmental inspection and hindering investigation of criminal offenses involving criminal organization.

The appointment of the new Minister of the Environment, Joaquim Alvaro Pereira Leite, momentarily calmed the criticism of the federal government. Leite held the position of secretary for the Amazon and Environmental Services at the ministry and was an advisor to the Brazilian Rural Society (SRB), one of the organizations that represent the agricultural sector in the country. Despite the ministerial change, the promises made by the federal government were still considered moderate, at the international level, for the commitment to help climate change.

In the Legislative Branch, the rapid progress of the matters on Environmental Licensing and Land Regularization was criticized for being able to reverse Brazilian environmental legislation. The approval of Environmental Licensing (currently PL 2159/2021) by the Chamber of Deputies generated controversy for allowing several licensing exemptions at the federal level. The proposal had been processed since 2004 in the House. The presidents of the Environment Commission (CMA), senator Jaques Wagner (PT/BA), and of the Agrarian Reform Commission (CRA), senator Acir Gurgacz (PDT/RO), agreed with the president of the Senate, senator Rodrigo Pacheco ( PSD/MG), that the proposals would only be deliberated when there was consensus between both commissions.

Another aspect highlighted in 2021 was the demand for the reduction of greenhouse gas emissions and the pressure for significant changes at the 26th United Nations Conference on Climate Change (COP26). The Conference approved the regulation of article 6, in the Paris Agreement, which creates an international market for the purchase and sale of carbon credits and created a carbon credit, which can be generated when a country reduces or removes Greenhouse Gases ( GHG).

In 2022, the federal government will have the challenge of improving its image internationally in the field of sustainability and implementing a Brazilian emissions trading system for companies and entities. In addition, in the sphere of the Legislative Power, parliamentarians will need speed and robust agreements to approve proposals of interest in the first semester, due to the difficulties of processing in the period close to the presidential elections.

International pressures related to sustainability in Brazil will continue in 2022. One of the contributing factors to this follow-up will be the six-month rotating presidency of Emmanuel Macron, President of France, in the European Council. Among the promises made to the pro tempore presidency, Macron promised a priority focus on the carbon tax at the borders.

The tax was a European Union plan published in 2021 that creates extra fees for the importation of products manufactured without complying with environmental rules. The main orientation of the block is for taxation on fuels. Despite the proposal, the European Parliament and Council need to approve and have consensus with the main international trading partners for the measure to come into force.

In addition, international attention will be focused on Brazil for the celebration of the 30th anniversary of Rio-92, the United Nations Conference on Environment and Development held in Rio de Janeiro, with Rio+30. The event is expected to discuss topics such as green consumption, reduction of Greenhouse Gases (GHG), carbon market and the incorporation of sustainable government models.

Another relevant point will be the 5th Session of the United Nations Environment Assembly (UNEA-5), which will take place from February 28 to March 2, in Nairobi, virtually. The meeting provides debates on intergovernmental actions on environmental issues and contributes to the implementation of the UN 2030 Agenda for Sustainable Development and its Sustainable Development Goals (SDGs).

This year, the Assembly will try to agree on a treaty to fight plastic pollution. In the pre-Unea document, the editorial team proposes policies to reduce the production and use of virgin plastic and decouple plastic production from the consumption of fossil resources. The newsroom has the support of companies such as Coca-Cola, Unilever, PesiCo and Nestlé.

The progress of the proposals on Environmental Licensing (Bill 2159/2021) and the new Land Regularization Framework (PL 2633/2020 and PL 510/2021) will be a priority commitment for the first half of 2022, according to the president of the Agrarian Reform (CRA), Senator Acir Gurgacz (PDT/RO).

Without reaching a consensus in 2021, the proposals should resume the agenda of the Agrarian Reform and Environment Commissions from February onwards due to the return of the Legislative Power. Still under the agreement of the presidents of the commissions for the joint processing of matters, the commissions will have a challenge to approve both propositions due to the controversial content of their writings.

The rapporteur of the Environmental Licensing project, Senator Kátia Abreu (PP/TO) has not yet presented her opinion. By the end of the 2021 legislative period, the proposal had received 79 amendments and letters of critical analysis of the content, such as from the Public Ministry of Labor, National Association of Attorneys of the Republic, Instituto Socioambiental, Network for Political Action for Sustainability, Coalizão Brasil Clima Forests and Agriculture, Society of Brazilian Archeology, Brazilian Society of Speleology.

The report on the Regularization project, by Senator Carlos Fávaro (PSD/MT), aims to benefit small producers, preserve the environment and favor food production. In addition, it provides for solving the irregular occupation of land and, in cases of crime, the Forest Code (Law No. 12.651/2012) will be used to establish punishments, leaving the beneficiary of the regularization to carry out the maintenance of the flora.

The president of the CMA, Senator Jaques Wagner, affirmed that the projects are vital to guarantee the balance between preservation and economic, social and environmental sustainability. The parliamentarian also made a commitment to quickly analyze the proposals in 2022.

The return of the Legislative Power will reinforce attention to the agenda of creating the regularization of the carbon market in Brazil. At COP26, the country agreed to the regulation of Article 6 of the Paris Agreement to create an international market for the purchase and sale of carbon credits and create a carbon credit.

Brazil will need to regulate a Brazilian emissions trading system for companies and entities. In this way, the country will be able to carry out through a voluntary market, that is, attest, verify and commercialize the proof of removal or reduction of emissions through projects or actions. On the other hand, in the regulated market, the country must meet reduction targets or limit emissions. Targets can be achieved by reducing greenhouse gas emissions in a manner regulated by carbon taxation or emissions trading systems. The models can also work in a hybrid way, that is, taxation and through the trading system.

In this sense, the Chamber of Deputies is awaiting the consideration of Bill 2148/2015, which establishes tax reductions for products suitable for the low carbon green economy. The matter is being processed as the main one and has Bill 528/2021, which regulates the Brazilian Emission Reduction Market (MBRE), as appended.

The rapporteur at the Environment Committee, deputy Carla Zambelli (PSL/SP), presented a new opinion in the form of a substitute, in December, to PL 2148/2015. In the new report, the deputy establishes guidelines for the creation of the Brazilian National Emissions Trading System (SBCE) and includes the National Integrated Registry of Greenhouse Gas Emissions Offsets (RNC-GHG) based on the National Policy on Change in the Climate (PNMC).

The RNC-GHG will have the purpose and function of registering emission reduction or GHG removal projects and the verified emission reductions (RVE) generated by them. In addition, the opinion provides that revenues from commercial transactions involving carbon credits (Per-GEE and RVE) will be withdrawn from the termination of the calculation basis of the Contribution to PIS/Pasep, therefore, they will not reproduce tax credits.

Also, the following will benefit from the resources of the constitutional funding funds of the North, Northeast and Midwest: producers and companies, individuals and legal entities, and production cooperatives that, according to the priorities established in the regional development plans, develop productive activities in the agricultural, mineral, industrial, agro-industrial, commercial enterprises, services and RVE generation and commercialization projects.

The opinion does not consider the activities regulated by the SBCE, agricultural and forestry activities, or undertakings related to alternative land use, developed within rural properties. As well as rural areas owned or controlled by the company linked to industrial activity or energy production.

In this sense, one of the biggest difficulties for the approval of the matter is the divergence of understanding on how the carbon market system should be implemented in Brazil. For the author of the article and vice-president of the Chamber of Deputies, deputy Marcelo Ramos (PL/AM), there are three aspects that hinder the proposition:

Finally, despite the strong commotion during the COP26 period for the approval of the matter in the National Congress, the matter should be discussed in 2022. It is expected that the rapporteur's new opinion will be more convergent in the Chamber of Deputies to proceed with the processing of the project.